Why Would Nannies Want to be Paid “Over the Table”?

Why Would Nannies Want to be Paid “Over the Table”?

Nannies can be real lifesavers for the busy working professional, especially when you have to report to your full-time job everyday. There are a lot of things that still need to happen on the homefront, including tending to small children, maintaining your home, food preparation, miscellaneous chores and errands.

Life can be extremely busy, which is why having a nanny can prove to be incredibly useful and convenient. In fact, many people choose hiring a nanny over traditional daycare facilities because of all the benefits and convenience.

But like any other type of employee, nannies need to be paid for their time and service. Unlike other types of jobs, however, nannies are frequently paid in cash “under the table” in order to avoid paying taxes and other benefits. This is never a good idea for either the employer or employee. Nannies may and should insist on getting paid the traditional and legal way, and for good reasons.

Here are just some of the reasons why nannies should insist on being paid legally, “above the table”, as opposed to unreported cash.

Being paid “over the table” gives a nanny a verifiable salary history, and helps them get credit and loans, and build a positive credit history. Credit is an extremely important component of a person’s financial profile and is fundamental to getting approved for a variety of loans, including car loans, personal loans or a home mortgage, to name a few.

Credit is also important to being approved for renting an apartment, a cell phone contract, and even getting hired for a job. Without an established wage and credit history, nannies – or anyone else who may be paid under the table – will find it difficult, if not impossible, to take advantage of any one of the above-mentioned benefits.

Many states require or permit employers to carry workers’ compensation or disability insurance for job-related injuries.  Generally, nannies are covered by those laws as well. While being a nanny isn’t exactly the type of job that one would assume would be filled with risk of injury, accidents do happen. Even though it might not be that common, nannies can and do get injured while on the job. If a nanny is injured on the job, but is not being paid legally, they will not be able to benefit from any available worker’s compensation or disability protection that would cover their medical bills and provide wage loss benefits for the time they cannot work.

Children grow up and a family’s financial circumstances or need for in-home care can change.  Therefore, nannies don’t typically stay with the same family or household for decades since it is rare the need for their services runs that long.  State unemployment compensation programs fill the gap for those times when an employee is in between jobs, and this is no different for a nanny who, like any other employee, needs to cover their bills while they’re not working and looking for another position.

But if there is no governmental record of the nanny working, there won’t be any unemployment insurance to take advantage of. This can put nannies at a major disadvantage when it comes to their finances and covering their bills while until they find a new position.

Final Thoughts – Getting Paid Legally Benefits Both the Nanny and Family

Paying legally benefits both nannies and the families that employ them. Employers may think they’re saving money by not reporting their nannies’ pay, and nannies themselves might think they’re “saving” money in income taxes. But the truth is, there are far more drawbacks to getting paid “under the table”. As noted above, nannies fare much better if their pay is reported through the traditional channels.  Likewise, families who pay “under the table” face significant financial risk if they are found out, including for back taxes on unreported wages, interest, fines and penalties.

Don’t worry, paying legally doesn’t have to cost a lot!  Give the 30 day trial of NannyPay a try. It’s only $149/annually for up to 3 household employees and will do most of the work for you. 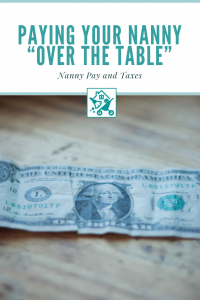