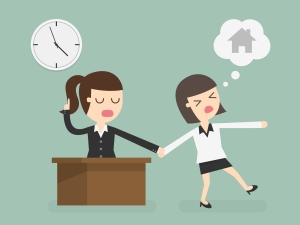 POST UPDATE: Since this was first posted on November 8th, at the end of November, a Texas federal judge granted a preliminary injunction against the new OT threshold level, so the new threshold did NOT go into effect on December 1st. While this did not go into effect it is still the law to pay your nanny overtime for any hours over 40 a week.

Effective December 1, 2016, the Department of Labor (DOL)’s new regulations regarding when an employee may be considered “exempt” (not eligible for overtime) under the Fair Labor Standards Act (FLSA) take effect. These new regulations dramatically raise the annual wage threshold for employees who could be classified as exempt from $23,000 to $47,476. In other words, unless the employee is paid $47,476 or more, the employee may not be salaried regardless of their title or duties, and must be paid overtime for all hours worked over 40 each week.

Generally speaking, under current law, if an employee earns more than $23,000 a year, and qualified for an exemption because they worked in an administrative, supervisory or executive role (the so-called “white collar” exemptions), the employee might qualify as exempt and could legally be paid a flat salary regardless of the number of hours he or she worked each week.

Most Nannies do not meet the White Collar criteria

These new rules will have little direct effect on domestic employers as most nannies, housekeepers and other domestic employees do not meet the “white collar” criteria to be classified as exempt from the FLSA’s overtime rules regardless of salary level; however, a personal assistant, or the head of staff employed in a household that has multiple domestic employees (think “Mr. Carson” of Downton Abbey), might still qualify as exempt depending upon their specific duties, and provided they are paid $47,476 or more after December 1, 2016.

A growing trend for in-home childcare is the nanny share. While arrangements can differ, a nanny share typically involves two families employing one nanny to care for their children, and share the cost of the nanny’s salary. A nanny share has many advantages, including providing two (or more) families the ability to provide in-home care for their children which they might otherwise not be able to afford on their own.

From a payroll tax standpoint, the IRS makes no provision for two (or more) household employers to jointly employ one person and “share” employer tax liability with another family. Generally speaking, if a nanny is watching the children of two or more families together, all families are separately employing that one nanny, and each family (employer) is responsible for their respective share of the employee’s pay and withheld taxes.

Failing to Account for OT can be Costly for Employers

Although each family in a nanny share arrangement may only be paying their respective share of the nanny’s pay each week, failing to account properly for overtime is a common, and can be a costly, mistake for these families. A nanny employed in a nanny share arrangement should still be paid one and one-half her normal hourly rate for all hours worked over 40 in any one week. As the DOL’s new overtime regulations make clear, the government is keen on expanding the number of employees who are entitled to overtime pay. So while families in a nanny share may be considered separate employers by the IRS when it comes to their obligations to withhold and pay payroll taxes, it is likely the DOL would frown upon any effort by families to use a nanny share arrangement to avoid paying overtime to a nanny who worked more than 40 hours in a week, and consider the families the “joint” employer of the nanny for FLSA purposes. In other words, if a nanny works 50 hours each week for two families in a nanny share arrangement, with each family paying for 25 hours of her time and withholding taxes on that basis, each family should pay 20 hours at the nanny’s regular rate and pay her 5 hours at the time and a half rate. If the hours worked over 40 are attributable to just one family, then that family should pay all those extra hours at time and one-half.

Families in a nanny share arrangement should be especially careful to properly document all of the nanny’s hours worked each week, and how, by whom, and at what rate the nanny was paid for those hours. Although the expectation is that your families will always have a wonderful relationship with your nanny, the failure to be paid overtime properly is a common complaint filed with the Department of Labor by recently terminated or laid-off employees, and could lead to your families being faced with a very costly and unexpected bill for unpaid wages down the road. 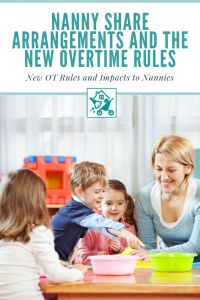