Determining How Much You Must Pay Your Household Employee

Determining How Much You Must Pay Your Household Employee

Although the issue of compensation is generally between you and your household employee, the government sets certain minimum standards. The Federal Fair Labor Standards Act (FLSA) establishes minimum wage, overtime pay, record keeping, and child labor standards affecting some full-time and part-time workers in the private sector.

Domestic service workers such as full-time nannies, babysitters, housekeepers, chauffeurs, and cooks are covered by the FLSA if (1) their cash wages from one employer are at least $2,100 in a calendar year (or the amount designated pursuant to an adjustment provision in the Internal Revenue Code), or (2) they work a total of more than 8 hours a week for one or more employers.

Covered nonexempt workers are entitled to a minimum wage of not less than $7.25, effective July 24, 2009. Keep in mind that your state may require you to pay your household employee a minimum wage that is higher than the federal minimum wage. Overtime pay at a rate of not less than one and one-half times their regular rates of pay is required after 40 hours of work in a workweek. NannyPay automatically calculates overtime pay at this rate, although the software will permit you to set a higher multiplier, if desired. You should check with your state to see if it has other minimum wage requirements.

You should also be aware that wages required by the FLSA are due on the regular payday for the pay period covered. Deductions made from wages for such items as cash or merchandise shortages, employer-required uniforms, and tools of the trade, are not legal to the extent that they reduce the wages of employees below the minimum rate required by FLSA or reduce the amount of overtime pay due under FLSA.

Some employees are exempt from the overtime pay provisions or both the minimum wage and overtime pay provisions of the FLSA. Because exemptions are generally narrowly defined under the FLSA, an employer should carefully check the exact terms and conditions for each exemption. Detailed information is available from local Wage-Hour offices. Generally, nannies are not considered to be exempt employees under the FLSA. 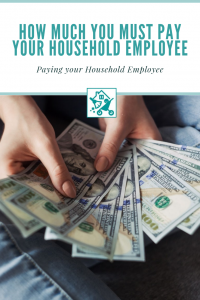